A Trip to Palawan: How to Make the Most of Your Visit

This is a guest post brought to you by Anna from Expert World Travel. You may see affiliate links sprinkled throughout the awesome, free content you see below. I’ll receive a small commission when you purchase from my links (at no extra cost to you).

The island province of Palawan has long been hailed as one of the most beautiful destinations in the Philippines. Sometimes referred to as “the last frontier” of the Philippines, Palawan is covered in lush forests perched on limestone cliffs, lined with white sand beaches, and surrounded by impressive marine life great for diving and snorkeling. It’s a nature lover’s dream. 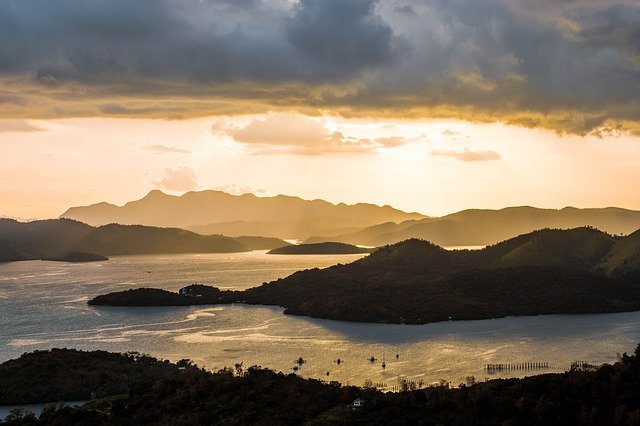 A Trip to Palawan: How to Make the Most of Your Visit

What to See in Palawan?

There are three major destinations in Palawan. Puerto Princesa is the capital city of the province. The most popular destinations here are the Underground River  (find your tour here) and the white sandy beaches of Honda Bay. El Nido on the northern tip of Palawan is a thriving tourist destination. Some of the country’s most exclusive resorts are found here. Coron, on the other hand, is a small and quiet town. Landscapes are a little more diverse and rougher and it is best known for fantastic reefs and shipwrecks for diving.

An emerging destination is San Vicente, located in between Puerto Princesa and El Nido. It’s minimally developed at this point, but with the newly built domestic airport, it’s sure to rise in popularity very soon. San Vicente is well known for Long Beach, which is a very long beach of unobstructed white sand. It’s a very quiet town with a few resorts and restaurants. Nearby is Port Barton, which is another town to check out when in Palawan.

Around Palawan are several other beaches, some remote, some private. Most of them can be made into day trips so you can enjoy the beach and nature all to yourself. 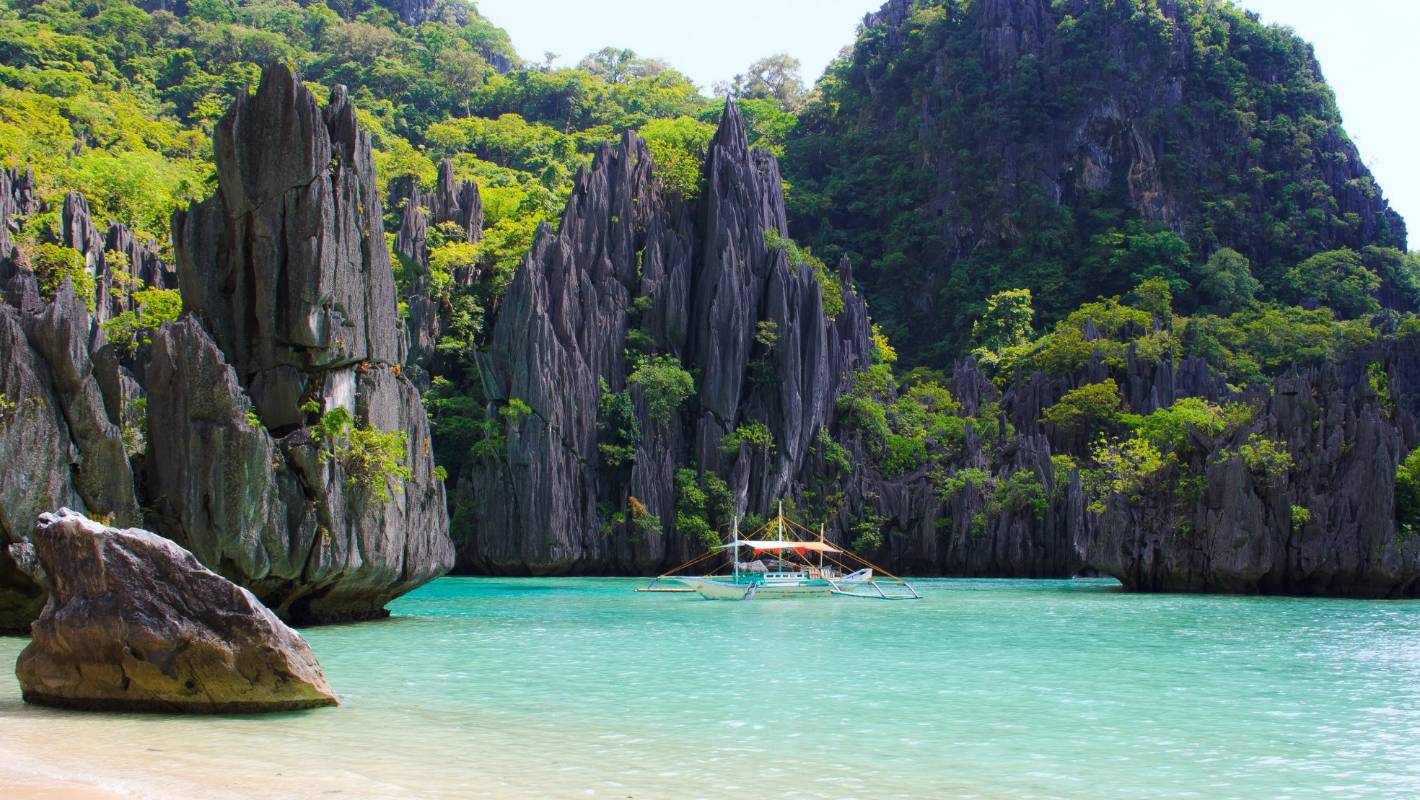 Where to Go in Palawan?

While it would be great to be able to see every nook and cranny of Palawan, there’s simply too much to see and not very much transportation to go around. However, there’s something for everybody in this province. 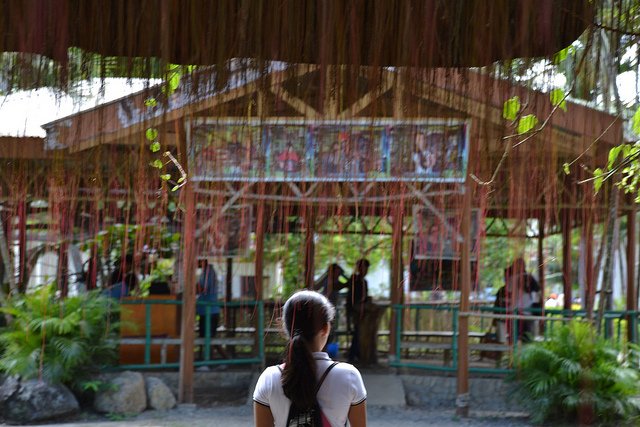 Photo by shankar s. on Foter.com / CC BY

Families with children will have the best time in Puerto Princesa. There are several things to do on both land and water. Aside from the Underground River and Honda Bay, you can also take a city tour that takes you to the Crocodile Farm, Butterfly Sanctuary and Mitra Ranch to see horses. There are also several museums to go around.

Find other tours of the area:

For Couples or Groups of Friends 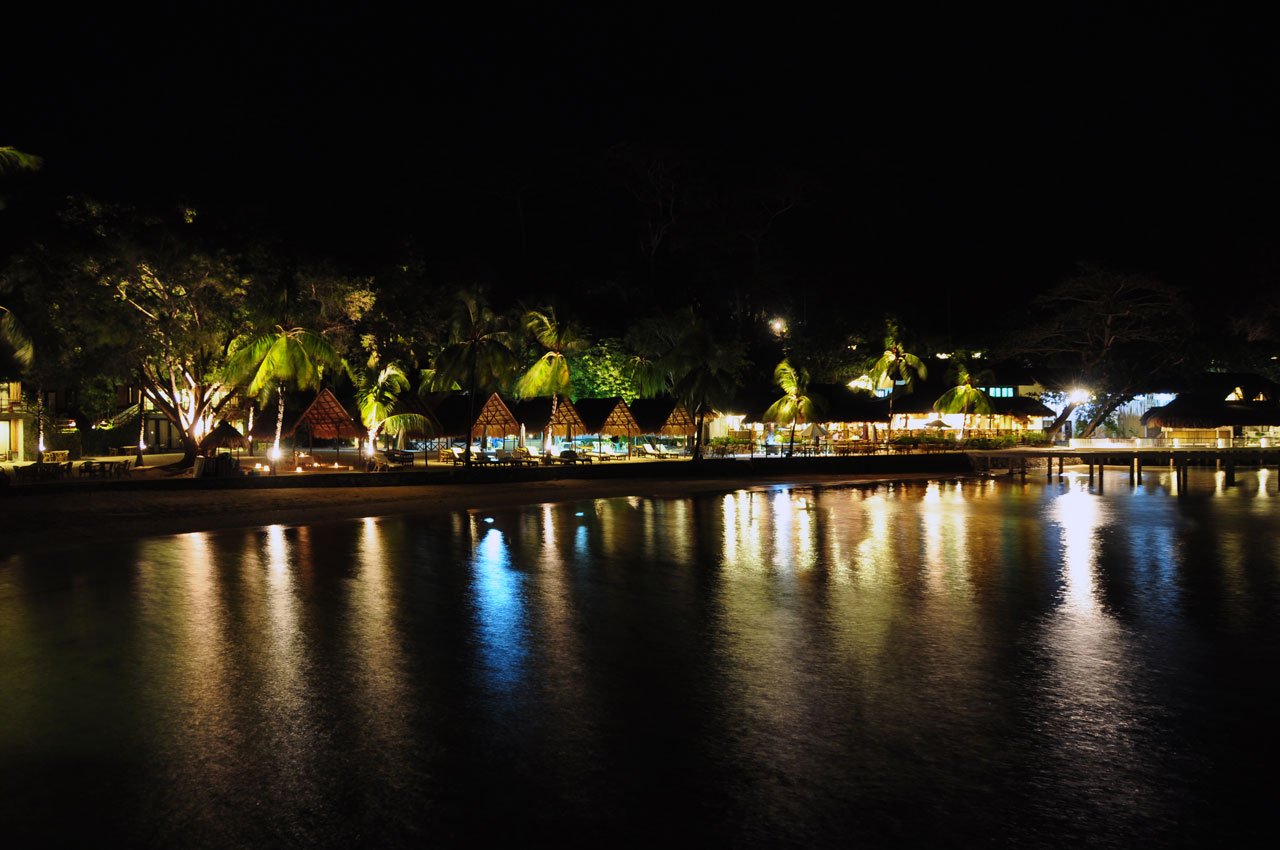 El Nido is a great place to be both romantic and go wild. The town is very much alive with bars and restaurants that are open all night. You can go island-hopping and have a mini party on every beach, or lounge in the resort for some alone time. 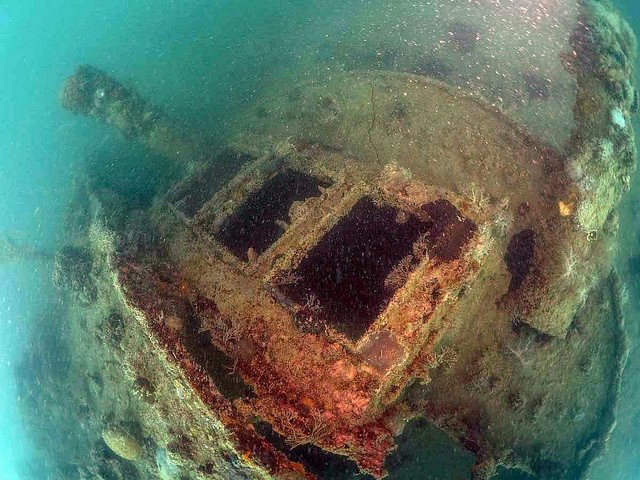 The best dive sites in Palawan are hands down in Coron. There are many reefs and marine sanctuaries to go around. If you’re lucky, you might even find sea cows, locally known as dugong, grazing on sea grass. For advanced divers, shipwreck diving is a must. 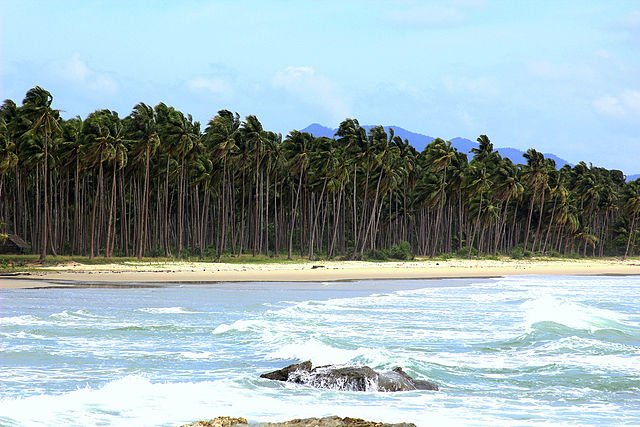 If you’re not afraid to rough it for a few days, head down to San Vicente. With no distractions of rowdy crowds or internet connection, you can enjoy nature in its rawest form.

Itinerary to See the Most of Palawan

While getting around Palawan is not the easiest, it’s possible to hit more than one spot when you spend your vacation here. If you’ll be in Palawan for four or five days, you can spend half of it in Puerto Princesa and half in El Nido. A bit longer and you can drop by San Vicente.

If you’re spending at least a week in Palawan, here’s one way you can go through Puerto Princesa, San Vicente, El Nido and Coron in one big trip.

From Manila, fly into Puerto Princesa and check-in at one of the hotels. Book a city tour (PHP 600 / USD 12 per person) at your hotel and go around the many places of interest. The tour usually includes several cathedrals, the Baywalk, Butterfly Garden and Tribal Village, Crocodile Farm, Mitra Ranch, Baker’s Hill, and the Binuatan Creations (weaving loom center). The tour ends in the afternoon, so you’ll have time to have a dinner cruise at the Iwahig Firefly Watching Tour (PHP 1,300 / USD 26 per person). It’s an ecotourism site where you can enjoy your dinner as you make your way down Iwahig River surrounded by thousands of fireflies lighting up your path. 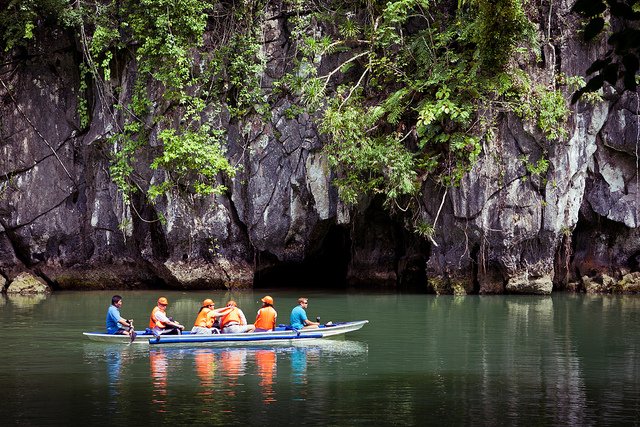 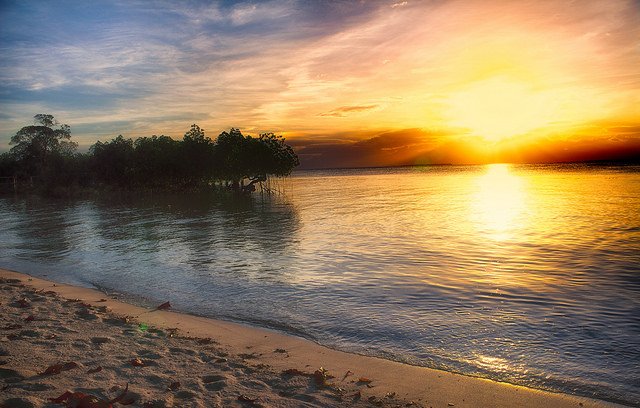 Photo by Ray in Manila on Foter.com

While package tours for Honda Bay usually entail the whole day, you can head to Sta. Lourdes Wharf and book a boat for your own DIY Honda Bay tour. A boat costs PHP 1,300 / USD 26 good for 6 people. When you get to the wharf, register at the desk and ask for a private boat. The environment officer will help you choose which islands to visit depending on what time you want to get back to the city. Ideally, you arrive at the wharf at 7am and be back by 12pm.

Once back in the city, check-out of the hotel and get ready to travel to San Vicente. It’s a 4-hour trip via shuttle van from Puerto Princesa. There are several operators at the San Jose Terminal with specific departure schedules. The most ideal operator is Virus Shuttle Vans that have departure times at 1PM and 5PM. Board the van and head to San Vicente to settle in for the night.

There’s not much to do in terms of activities in San Vicente, but the amazing Long Beach is worth the stopover. Spend the whole morning lounging around on fine white sand. It’s 14.7 kilometers long and you’re sure to find your own secluded spot for some peace and quiet. There are also 22 islands off its coast, and you can hire a boat for PHP 1,200 (USD 24) to go island-hopping. 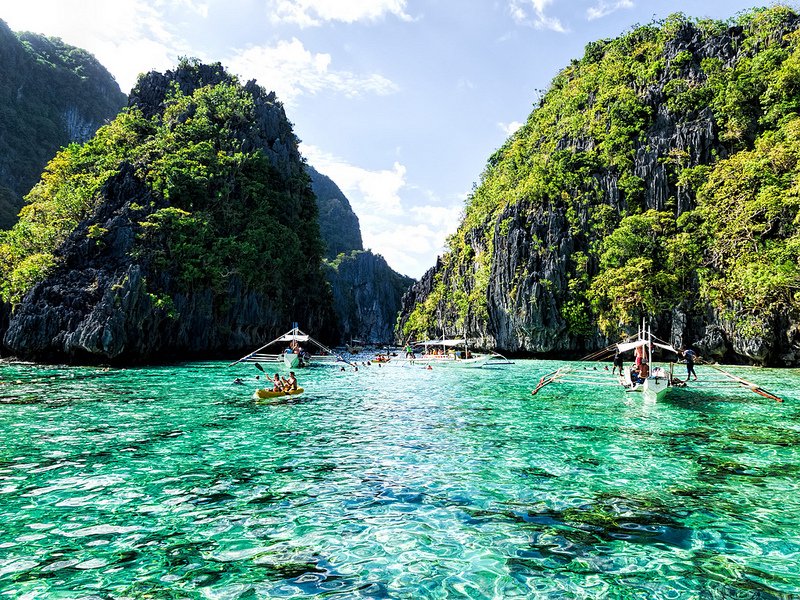 From San Vicente, you can hire a private van for direct pick-up and drop-off from San Vicente to El Nido. If you’re traveling in a group, the rate of PHP 7,000 (USD 135) might be worth taking. If you’re alone or you don’t want to pay that amount, there are public vans and buses that transport people between San Vicente and El Nido. Head to Roxas town and catch a bus or a shuttle van headed for El Nido.

Once in El Nido, your days are really up to you. There are various island hopping tours to choose from. All these tour packages are standardized by the local government, so it doesn’t really matter which operator you go with. There are five tour packages to choose from, each one highlighting different islands and landmarks around El Nido. Spend all day snorkeling in some of the clearest waters and richest reefs in the Philippines. At night, go bar-hopping in town for some cheap eats and local drinks. 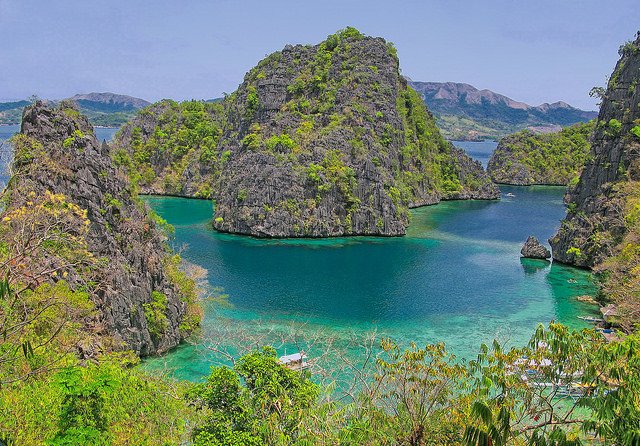 Photo by Ray in Manila on Foter.com

There are two ways to go to Coron from El Nido. The better and definitely safer way is via AirSwift, the only airline operator in El Nido. There are El Nido to Coron flights every Monday, Wednesday, Friday and Sunday. One-way tickets are at approximately PHP 3,300 (USD 63).

The cheaper and less reliable way is via ferry. It costs half the amount but double the time, and it includes riding a ferry across most likely rough seas. The ferry leaves El Nido at noon everyday, so it in case your schedule doesn’t fit an AirSwift flight, then the ferry is a possibility. It’s not exactly dangerous, but it’s not 100% reliable either, so perhaps opt for the flight if you can spare a few more dollars for your safety.

There are fantastic tours around Coron as well, and the scenery is a bit different. While Puerto Princesa, San Vicente, and El Nido are all about lounging on amazing beaches, Coron is more about jumping into lagoons and hiking up cliffs. Most of the islands are surrounded by mangroves, so there aren’t as many beaches to lounge on. However, Coron’s limestone cliffs hide many waterscapes that visitors need to hike, swim, or jump to. It’s an adventure on its own.

But the best thing to do in Coron is definitely to go diving. Fantastic marine conservation efforts makes Coron’s marine life extremely beautiful and exciting. There are lots to see, including the shy sea cows that Coron is known for. There have also been dolphin sightings and many different kinds of fish. The best part about diving in Coron is definitely the Japanese shipwrecks sunk in WW2. All the shipwrecks are at a 30-meter depth, so make sure you have the proper certification.

The Best of Palawan

There is so much to see in Palawan, and so many hidden nooks just waiting to be discovered. Many travelers have visited Palawan and have decided to never leave! If you don’t have a ton of time, it’s totally fine to just stay put in one area. Immersing yourself in everything a specific town has to offer is a great way to go! Fortunately, one big trip to Palawan can give you all the best the island, and the Philippines, has to offer.

Thank you Anna! Anna was born to travel the world having studied languages all her life. Although she has traveled the world, she now calls Switzerland home and spends her time writing about her experiences on her travel blog with her husband.

12 Best Places to Visit in Idaho