Things to Do in Bratislava, Slovakia: A Complete Guide

I visited Bratislava after a weekend in Vienna, Austria, and didn’t know what to expect from the city at all! Which is the reason I made this “things to do in Bratislava” guide for you all. For some reason, the name Bratislava sounded a bit scary to me and I was somewhat nervous to go alone.

Not knowing anything about Slovakia, I couldn’t put a finger on why the name of the city had me on edge.

I later figured out that the movie Hostel and the movie EuroTrip were both based in Bratislava.

They both weren’t even filmed in the city itself, but each movie still was able to completely villainize the city. In fact, due to these films, Bratislava lost 75% of its tourism as a kickback!

After stepping off of the bus from Vienna into Bratislava, I realized the movies were completely wrong! Bratislava is a charming mix between the elegant Viennese style and the Soviet buildings that scatter Central Europe.

Bratislava is the capital city in the country of Slovakia and is located in the southwest of Slovakia bordering Austria and Hungary. Before 1993 the Czech Republic (now Czechia) and Slovakia were one country, Czechoslovakia.

I immediately fell in love with this city and wished I could have stayed longer than 2 nights! I still got to explore a ton in that short time and with that, here is my complete guide of things to do in Bratislava!

While we’re at it, let’s be friends on Instagram and Tiktok!

4 Fairytale Villages in Europe You Must Visit

Things to Do in Bratislava, Slovakia 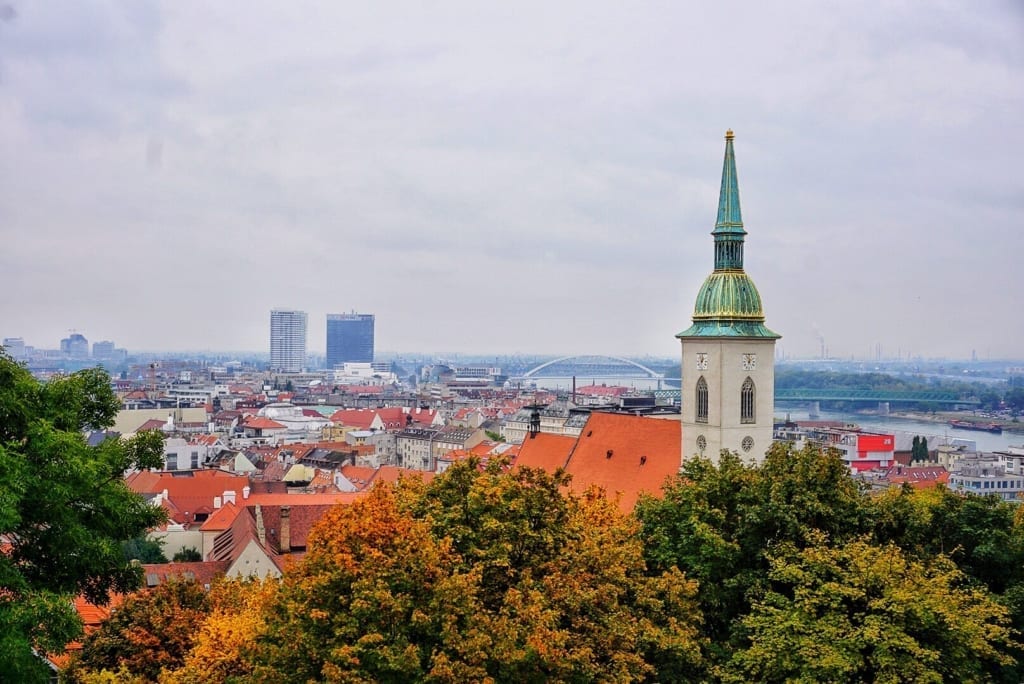 1. Go on a Free Walking Tour

One of my favorite things to do when I enter a new city is to go on a walking tour.  I really enjoyed the tour I did with Be Free Tours in Bratislava. Even though it was really cold outside for my tour in October, it was well worth being chilly! The tour walks you through most of the main areas of Bratislava and tells you everything you never knew about the city. The walking tour ended up being my favorite thing to do in Bratislava which is why I put it at the top!

They took us to the majority of the hot spots in Bratislava like Hviezdoslavovo Square, Old Town Hall and Tower, and the famous Čumil statue. They are free and run by tips only. Plus, if you go to their site you’ll see they operate a bunch of other different types of tours you can join. 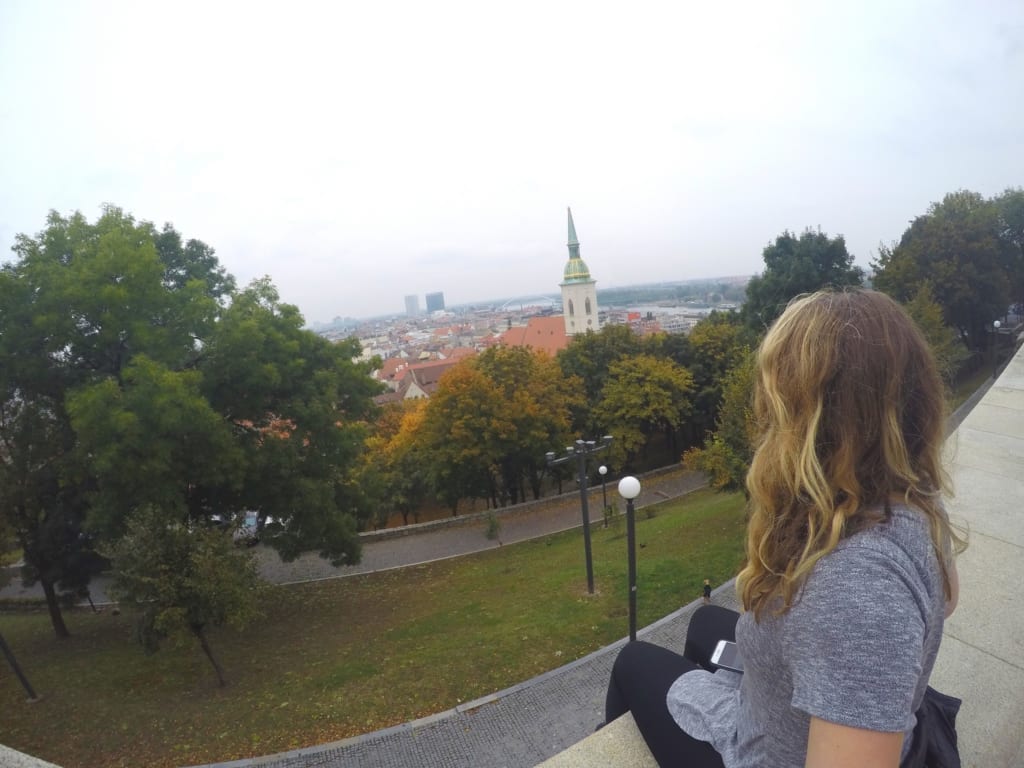 2. Visit the Blue Church (The Church of St. Elizabeth)

If you go on the free walking tour they’ll take you to the Blue Church! This church is a must-see and one of the coolest churches I’ve ever been to. The inside is also blue and at night they light up the outside if you decide to go in the evening. This church is a Hungarian Secessionist Catholic church designed in the art nouveau style and is located in Old Town Bratislava. It was built in the 20th century, so isn’t the oldest church you’ll ever see, but it is so unique and fun to visit! 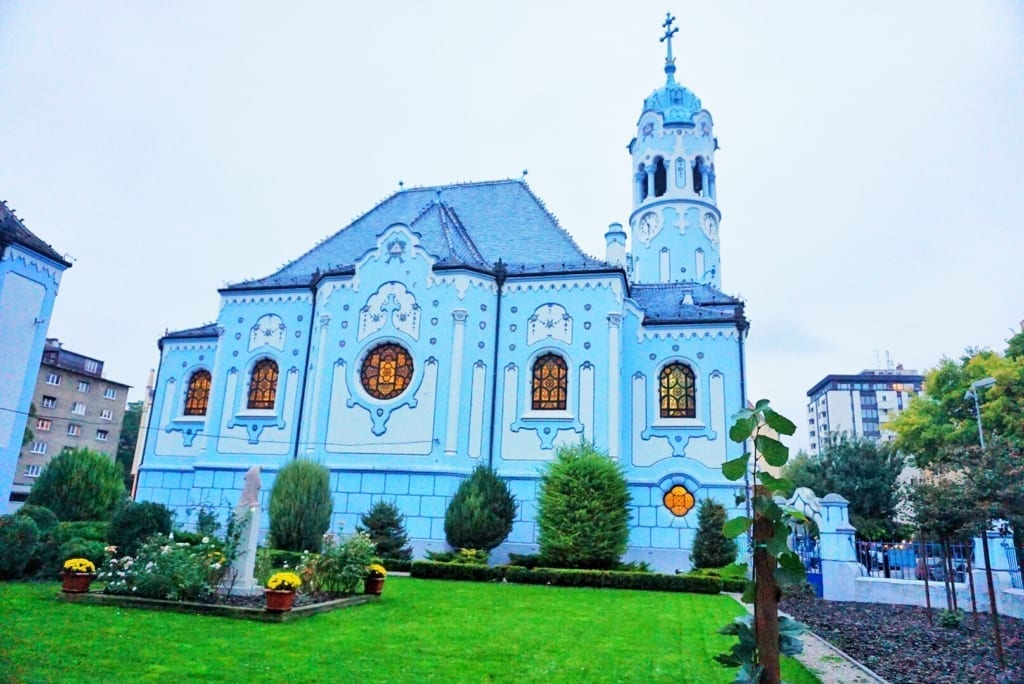 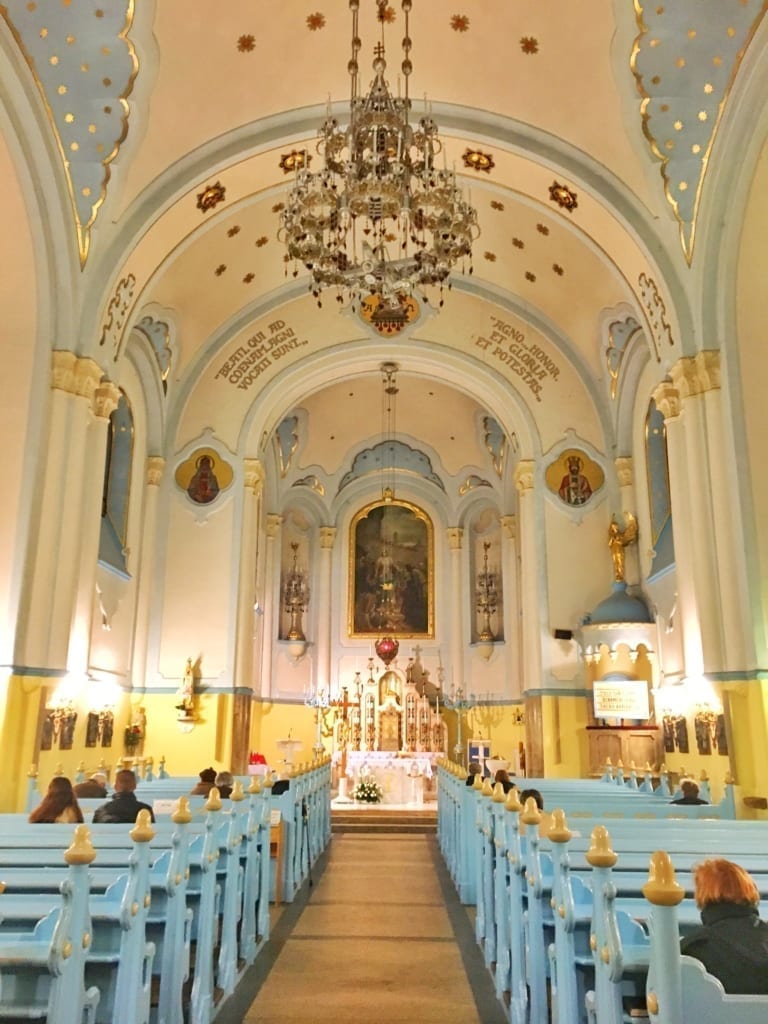 First a blue church and now a pink palace? What more can you ask for in a building? Primate’s Palace is a baroque-classicist palace located in the center of Bratislava. This is the spot where Napolean signed a peace treaty titled, ‘The Peace of Pressburg’ in 1805. Now, this palace hosts the Mayor’s seat and the City Council.

It’s worth walking by just because of the color and the building’s beauty. You can also go inside for a few euros to see the Hall of Mirrors. This is where various concerts take place. I didn’t go inside because I was told it was so-so, however, you can decide for yourself by reading some Tripadvisor reviews. 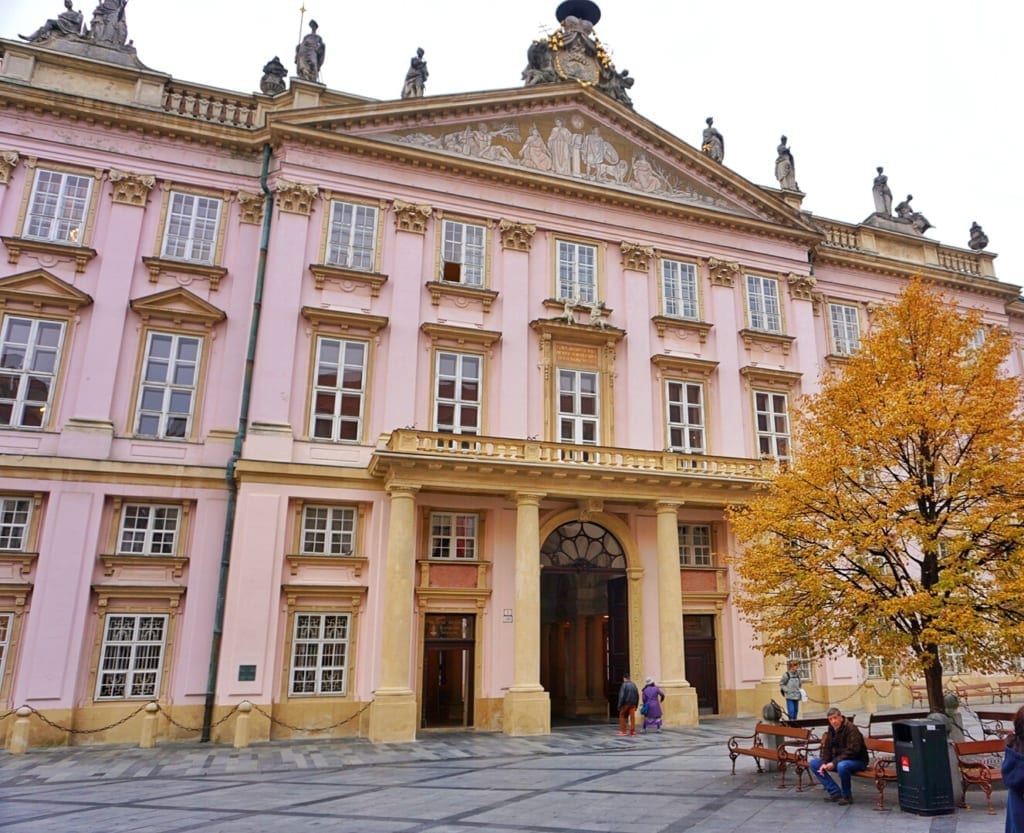 This castle is located on a hill above the old town of Bratislava. It is first spoken about in history books clear back to 907 and is associated with the battle between Bavarians and Hungarians. It was then rebuilt several times throughout history after it has burnt down. Nowadays the inside is home to the Slovak National Museum – Museum of History. This museum is included as a stop you can go to with the Bratislava card, otherwise, you can buy tickets at the door or online.

I didn’t go inside but thought the outside was pretty fun. You’ll also get amazing views of Bratislava and the Danube River below if you walk around the castle. 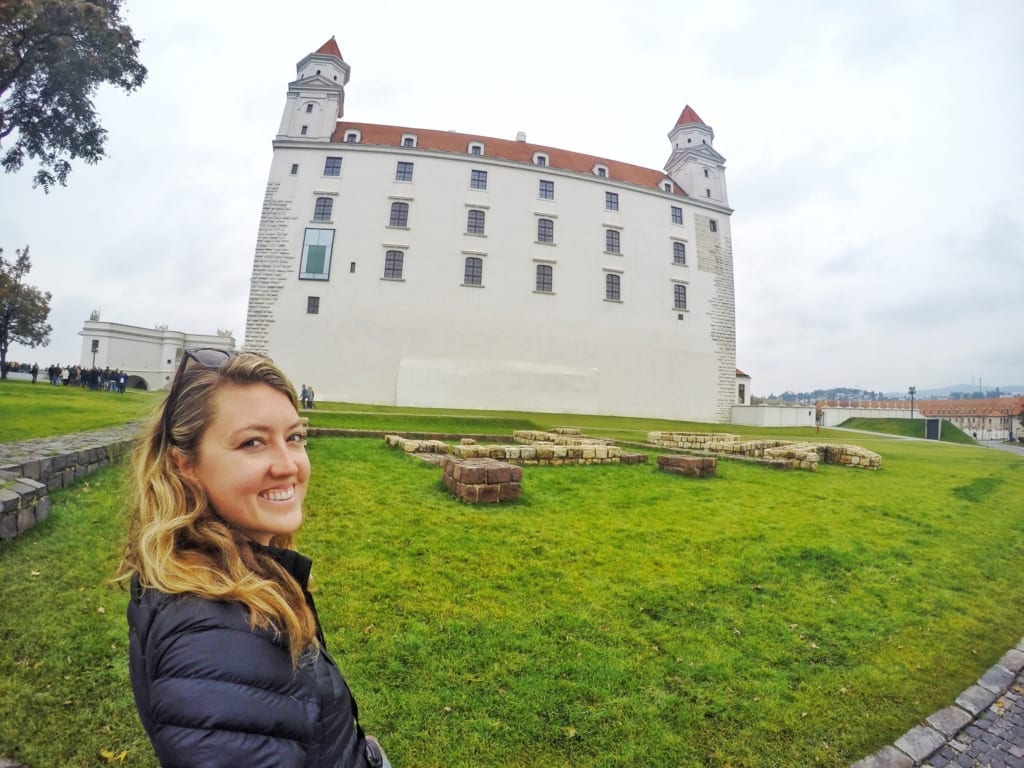 The Old Town portion of Bratislava is pretty small, but it is such a cute area that you shouldn’t miss! I mostly hung out in this area while I was in the city for 2 days. There were tons of great restaurants lining the streets and it just had such a cute vibe. It’s the perfect place to get a coffee and to meander down the streets until your heart’s content! If you want a great view of Old Town, I recommend heading up to the top of the tower on the UFO bridge to see the entire area from the sky! 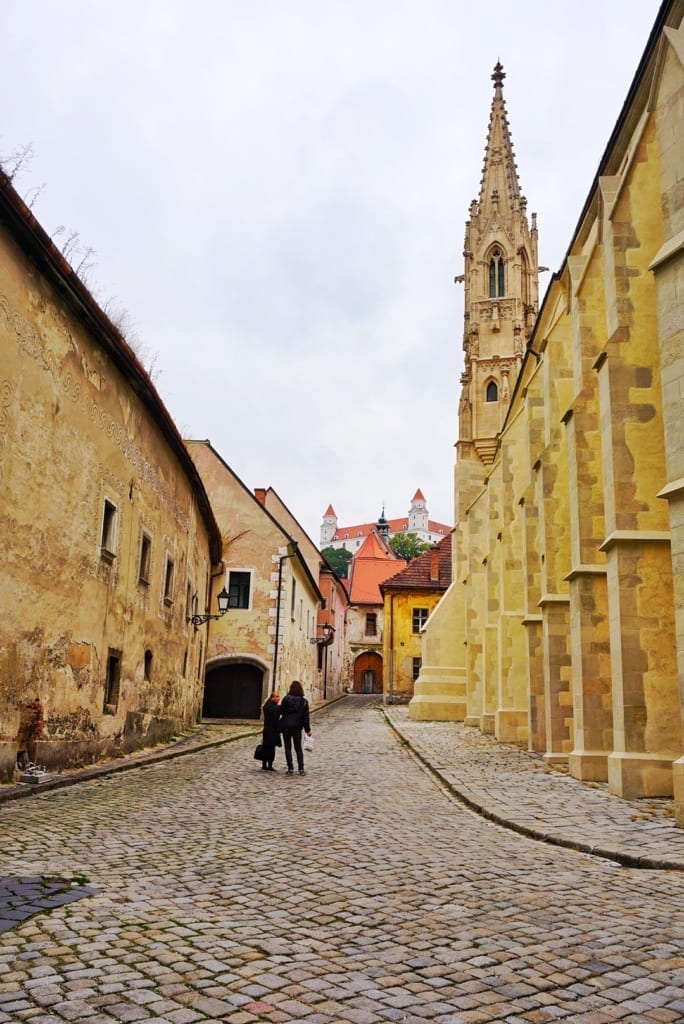 This is the underground sewer worker statue that you can’t miss while in Bratislava. No one knows the true meaning of why he’s there except for the fact they wanted to brighten up the area after what was called the Communist-era architecture decoration. You’ll find it right in the middle of the city so it’s pretty easy to spot and get a selfie with. He’s now basically become the mascot of Bratislava! 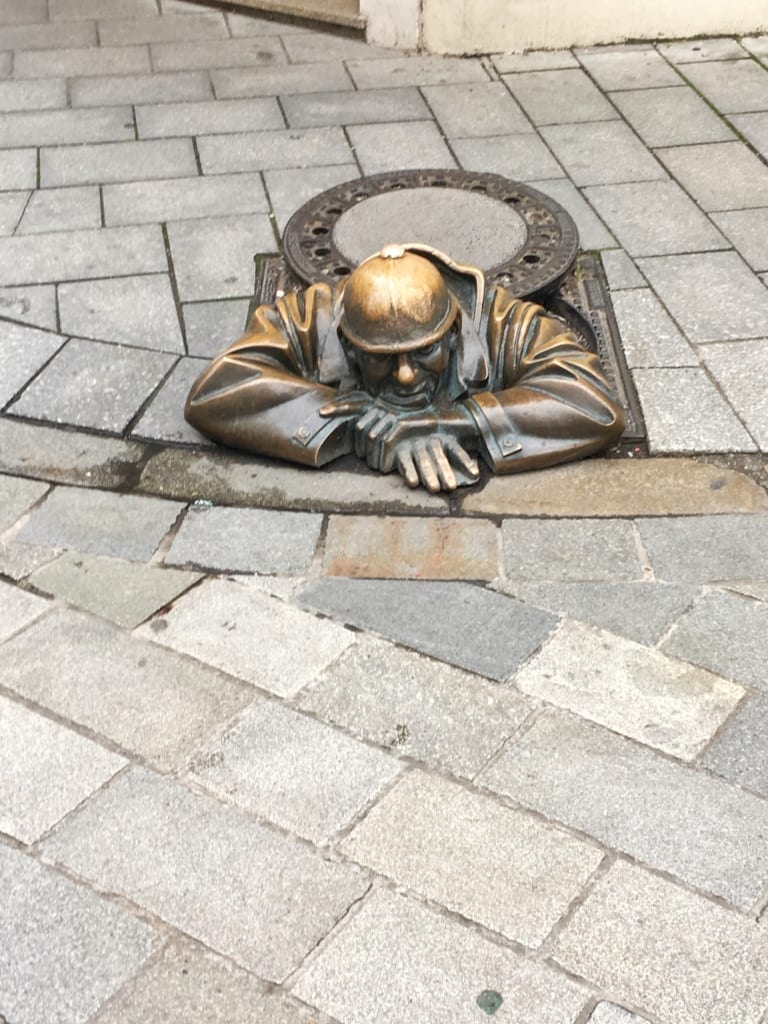 Bratislava was an important center for Jewish life and the Old Jewish Quarter is worth checking out. The only place Jews were allowed to settle was Židovská Street, known as Judengasse. The Jewish Quarter in Bratislava was destroyed during the war, but there are still some remnants, murals, and statues commemorating WWII and what it used to look like.
Be sure to look out for the hidden gate of the synagogue from the 14th century or the Holocaust Memorial. You can also visit the Jewish Community Museum for more history of Jewish people in Bratislava. Interested in learning more about the Jewish history in Bratislava, check out all of these other sites. 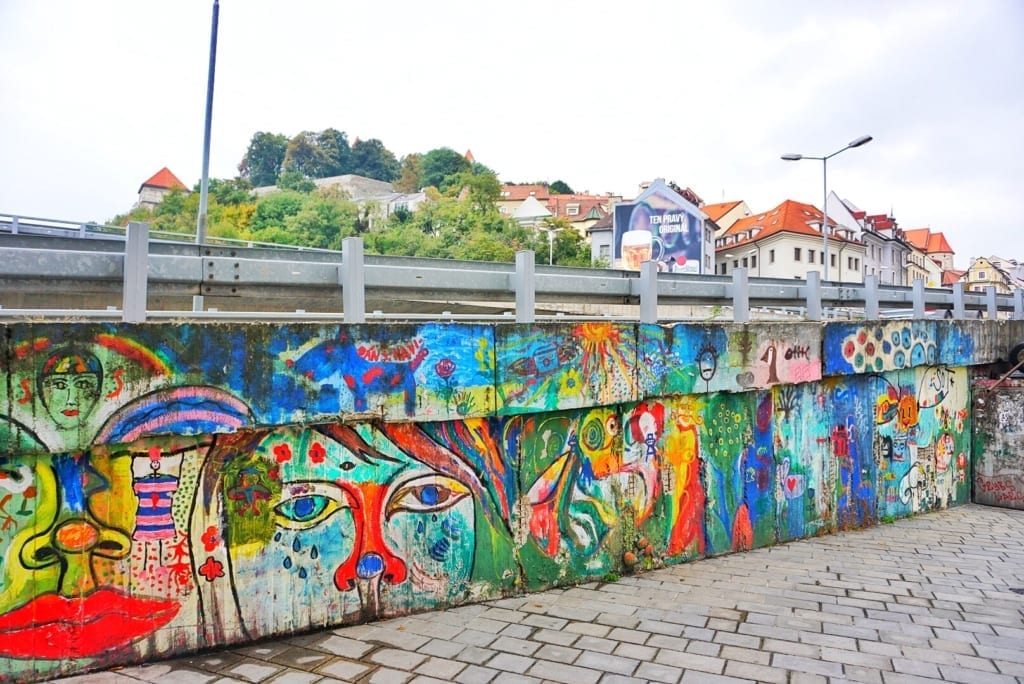 This is a medieval gate built in 1300 that was one the entrance to the city. It is now considered one of the symbols of Bratislava and is one of the oldest buildings in town. On the tower is a statue of archangel Michael slaying a dragon, hence the name Michael’s Gate. Now, above the gate, you’ll find the Museum of Arms that discusses the medieval fortification of Bratislava. 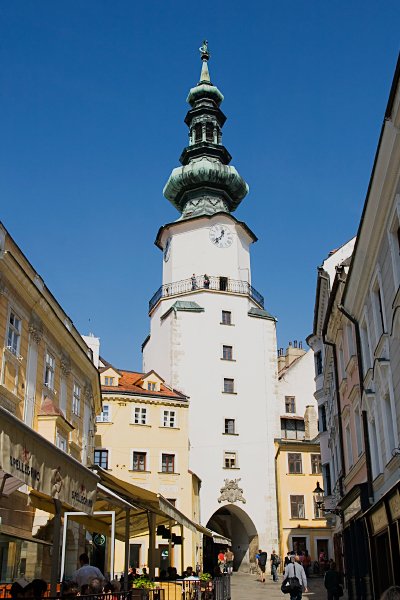 This is a hilltop monument and burial ground commemorating almost 7,000 Soviet soldiers that died in WWII while liberating the city in 1945. The views from the top are amazing as it’s situated above the castle! If you want to see more of Bratislava from the top, this is a great option. 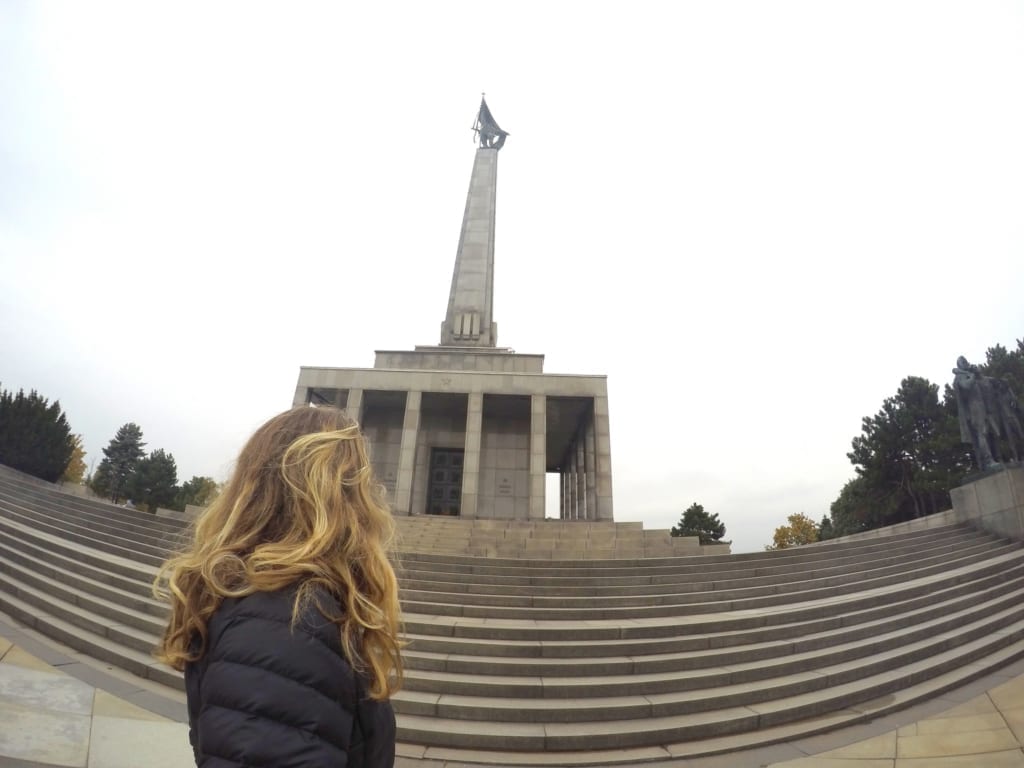 Towering about 100 meters in the sky, the UFO Observation Deck is a great place to see Bratislava from above! You can find this bridge within walking distance of the Bratislava castle and it might be some of the best views you can get in Bratislava. It’s also a great spot to watch the sunset over the bank of the Danube river. This bridge is also known as the SNP Bridge and was built in the 1970s to commemorate Slovak resistance to the 1944 German invasion. 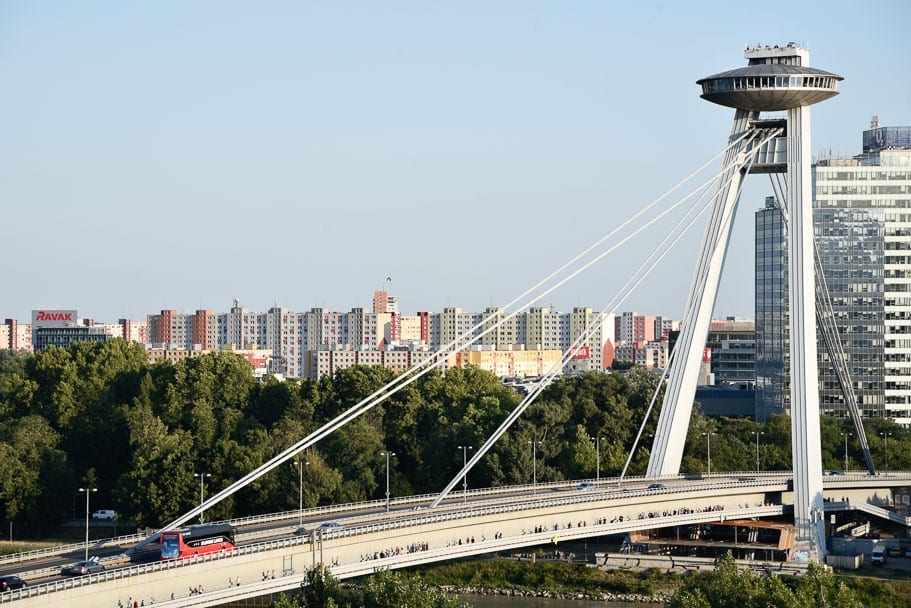 If you’re a fan of churches (I like to check them out when I’m in different countries) then you’ll want to visit St. Martin’s Cathedral. Unlike the Blue Church, this cathedral is the oldest in Bratislava. It’s known for being the coronation church of the Kingdom of Hungary! You’ll find this cathedral in Old Town built in the city’s defensive walls. 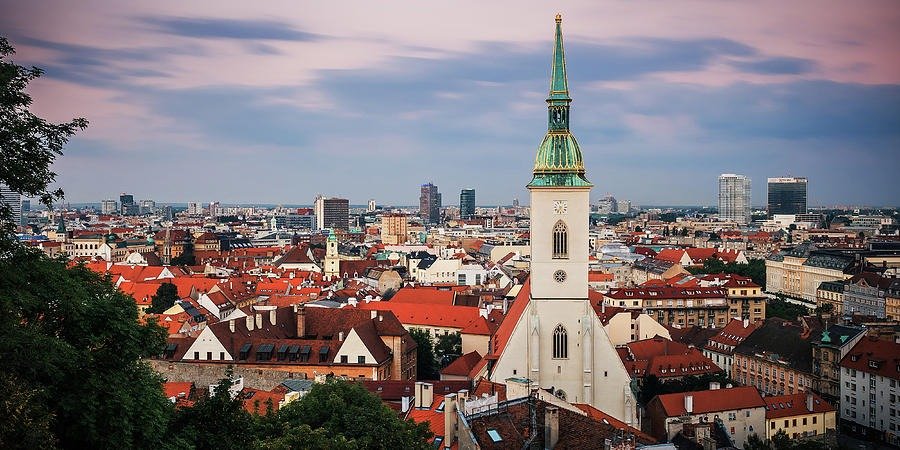 The Dunubiana is an extremely unique art museum located to the south of Bratislava. It opened in 2000 and holds art exhibits from numerous Slovak, European and world artists.

The special thing about this museum is that it’s quite literally on the Danube River and straddles 3 countries (Slovakia, Hungary and Austria). The architecture is incredibly unique and there’s a sculpture garden outside of the museum that you can walk around. If you want a unique view of Bratislava, this is your spot, especially at sunset! 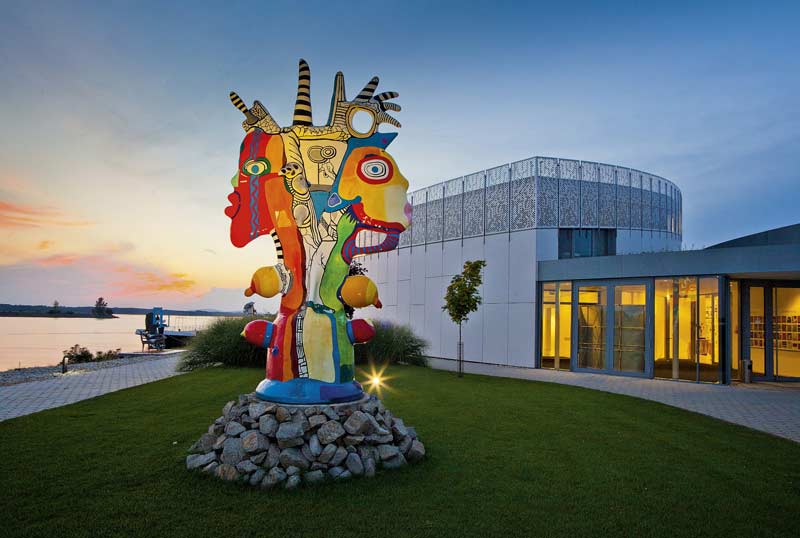 Devin Castle is located on a massive cliff with panorama views of the Danube and Morava rivers. These castle ruins are close to Old Town Bratislava and date back to the 5th century B.C. Currently, the castle is a museum that has several exhibits. If you want to avoid crowds, I recommend coming in the morning. Around the area, there are also great hiking and biking trails.

The Grassalkovish Palace was built as the summer palace for the chairman of the Hungarian Royal Chamber in 1760. Now the palace is the official residence of the President of the Slovak Republic. Behind the palace, you’ll find a beautiful park, Hodžovo Square, where you can go walk around to get away from the bustling city. 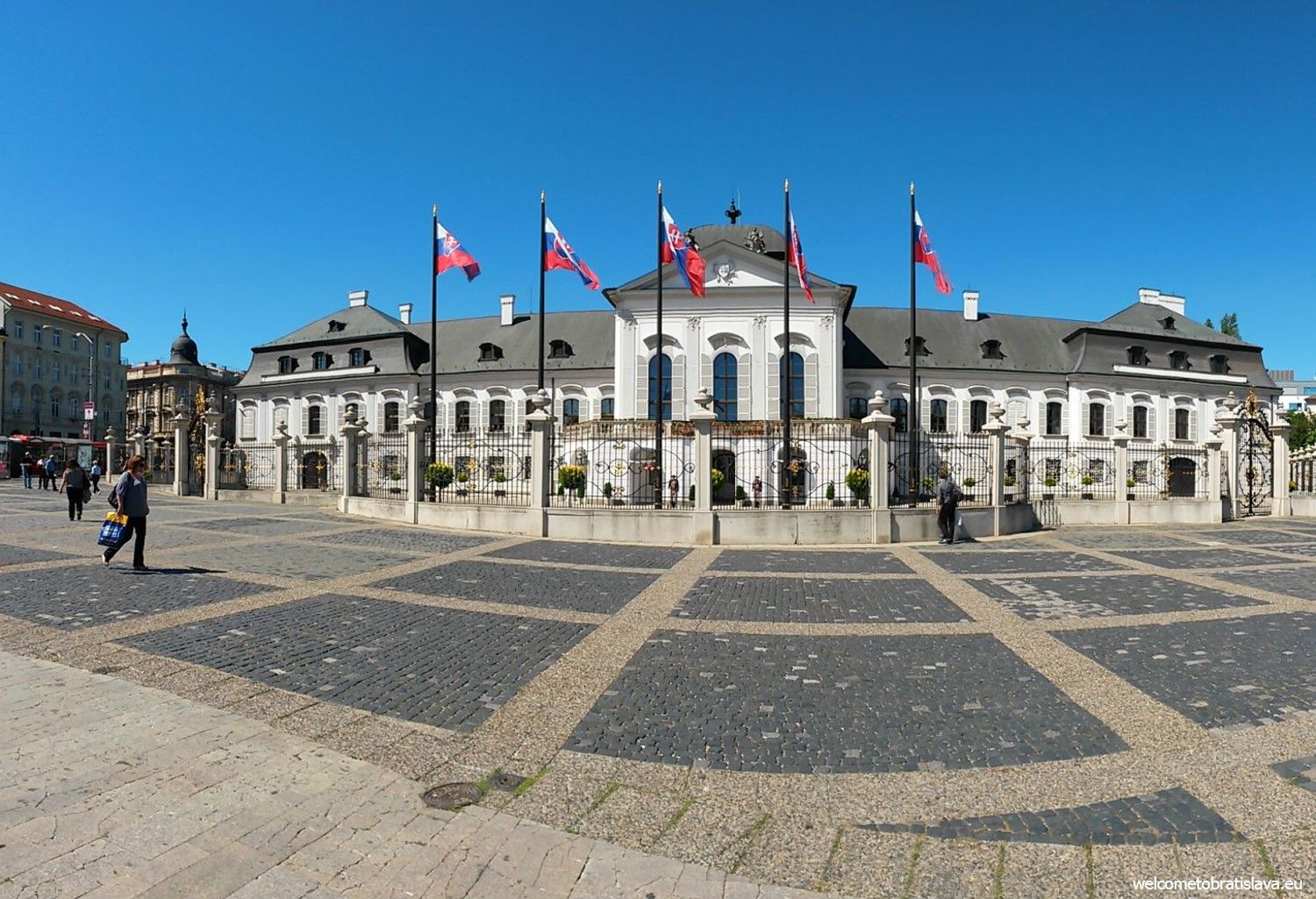 What to Eat in Bratislava

Here’s a list of a few dishes you’ll want to try while you’re in Slovakia! 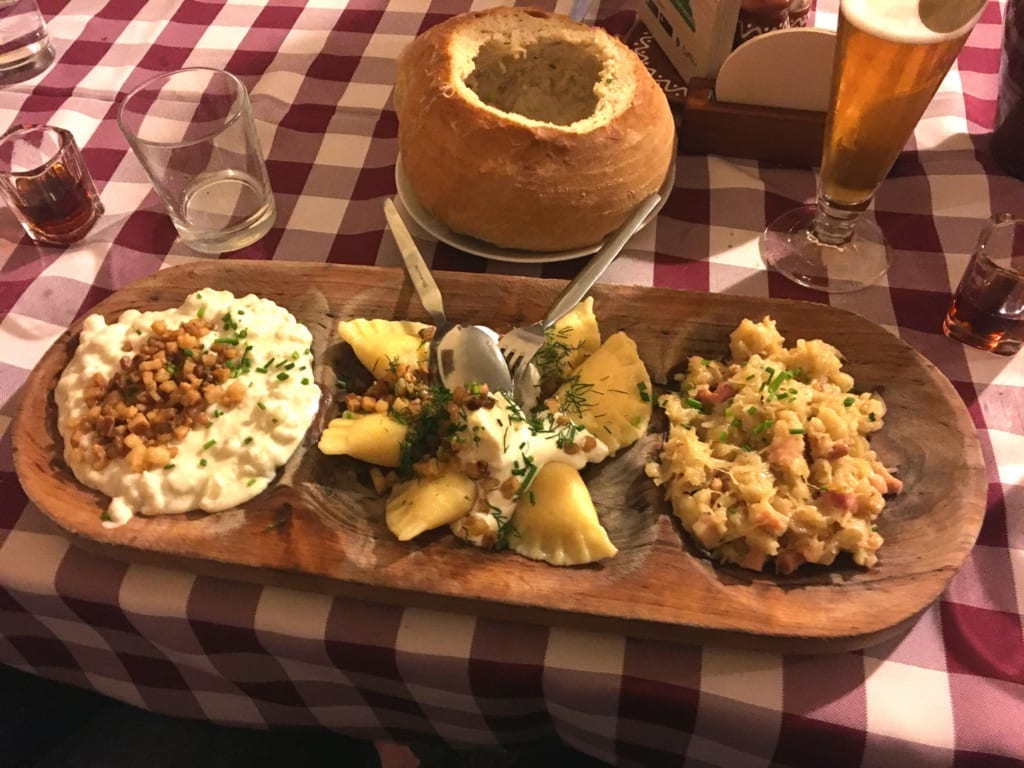 Where to Eat in Bratislava

Breakfast: Urban House – This is a perfect breakfast or brunch spot. They’ve got great coffee, strong wifi, and an amazing selection of salads, sandwiches, etc.

Lunch: Zylinder – You can come here for dinner or lunch and they’ve got a great selection of Slovak food you’ll want to try. 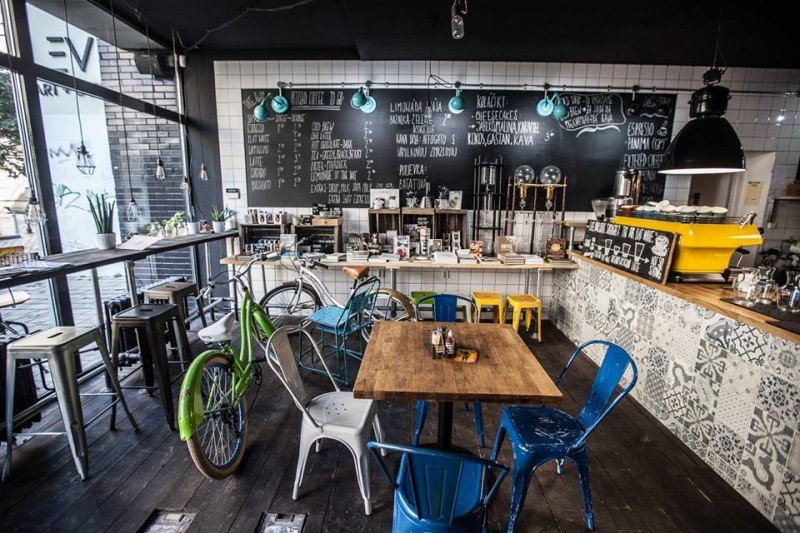 Where to Stay in Bratislava

This is a 4-star hotel from $70-$100 a night. It’s extremely clean and new! They have a great breakfast and are located close to Old Town. 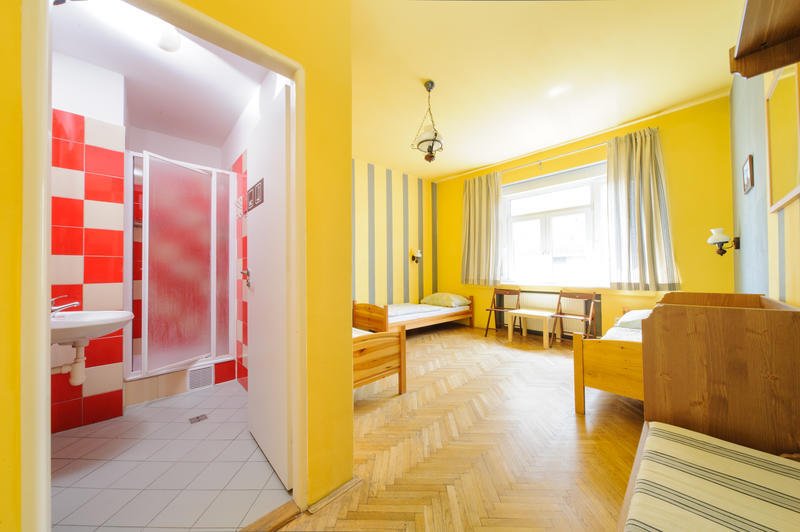 (via)
I stayed in Hostel Blues and really enjoyed my stay while backpacking! In fact, this hostel is where I met some of the coolest people while traveling solo. It’s got a welcoming vibe and is close to Old Town and many restaurants. The hostel is clean and has most of the necessary amenities you’ll need along with a great local staff full of knowledge about the area.

I hope this gave you a better sense of things to do in Bratislava! If you’re visiting Vienna, Austria then Bratislava is a must-see day trip! Traveling solo in Bratislava was also extremely easy and I met some amazing new friends at my hostel and walking tour that I’m going to be traveling with again!

Also, it is easy to get to Bratislava on Slovak Lines bus from Vienna and can be a great weekend trip. Don’t miss out! 🙂

What 3 Months Traveling in Europe Cost Me
Diaries From Around the World: 2 Months, Iceland, Germany, Austria
Hallstatt Austria: 8 Reasons to Visit Soon
Why Salzburg is My Favorite City in Austria